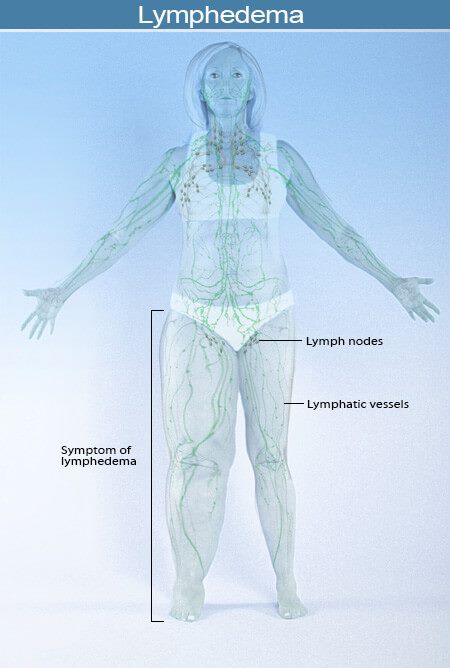 Lymphedema is swelling in one or more extremities that results from impaired flow of the lymphatic system
The lymphatic system is a network of specialized vessels (lymph vessels) throughout the body whose purpose is to collect excess lymph fluid with proteins, lipids, and waste products from the tissues. This fluid is then carried to the lymph nodes, which filter waste products and contain infection-fighting cells called lymphocytes. The excess fluid in th…e lymph vessels is eventually returned to the bloodstream. When the lymph vessels are blocked or unable to carry lymph fluid away from the tissues, localized swelling (lymphedema) is the result.
Lymphedema most often affects a single arm or leg, but in uncommon situations both limbs are affected
Primary lymphedema is the result of an anatomical abnormality of the lymph vessels and is a rare, inherited condition.
Secondary lymphedema results from an identifiable damage to or obstruction of normally-functioning lymph vessels and nodes.
Worldwide, lymphedema is most commonly caused by filariasis (a parasite infection), but lymphedema most commonly occurs in women who have had breast cancer surgery, particularly when followed by radiation treatment.
Mild lymphedema first may be noticed as a feeling of heaviness, tingling, tightness, warmth, or shooting pains in the affected extremity. These symptoms may be present before there is obvious swelling of an arm or leg.
Other signs and symptoms of early or mild lymphedema include:

Secondary lymphedema causes
Secondary lymphedema develops when a normally-functioning lymphatic system is blocked or damaged. Often breast cancer surgery, particularly when combined with radiation treatment, is the most common cause. This results in one-sided (unilateral) lymphedema of the arm. Any type of surgical procedure that requires removal of regional lymph nodes or lymph vessels can potentially cause lymphedema.
Surgical procedures that have been associated with lymphedema include vein stripping, lipectomy, burn scar excision, and peripheral vascular surgery.
Damage to lymph nodes and lymph vessels, leading to lymphedema, can also occur due to trauma, burns, radiation, infections, or compression or invasion of lymph nodes by tumors.
Worldwide, however, filariasis is the most common cause of lymphedema. Filariasis is the direct infestation of lymph nodes by the parasite Wuchereria bancrofti. The disease is spread among persons by mosquitoes, and affects millions of people in the tropics and subtropics of Asia, Africa, Western Pacific, and parts of Central and South America. Infestation by the parasite damages the lymph system, leading to swelling in the arms, breasts, legs, and, for men, the genital area. The entire leg, arm, or genital area may swell to several times its normal size. Also, the swelling and the decreased function of the lymph system make it difficult for the body to fight infections. Lymphatic filariasis is a leading cause of permanent disability in the world

What are the symptoms of lymphedema?​ 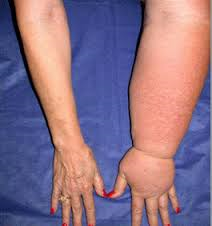 The swelling of lymphedema usually occurs in one or both arms or legs, depending upon the extent and localization of damage. Primary lymphedema can occur on one or both sides of the body as well. Lymphedema may be only mildly apparent or debilitating and severe, as in the case of lymphatic filariasis in which an extremity may swell to several times its normal size. It may first be noticed by the affected individual as an asymmetry between… both arms or legs or difficulty fitting into clothing or jewelry. If the swelling becomes pronounced, fatigue due to added weight may occur, along with embarrassment and restriction of daily activities.
The long-term accumulation of fluid and proteins in the tissues leads to inflammation and eventual scarring of tissues, leading to a firm, taut swelling that does not retain its displacement when indented with a fingertip (nonpitting edema). The skin in the affected area thickens and may take on a lumpy appearance described as an orange-peel (peau d’orange) effect. The overlying skin can also become scaly and cracked, and secondary bacterial or fungal infections of the skin may develop. Affected areas may feel tender and sore, and loss of mobility or flexibility can occur.
Other symptoms can accompany the swelling of lymphedema including:

A thorough medical history and physical examination are done to rule out other causes of limb swelling, such as edema due to congestive heart failure, kidney failure, blood clots, or other conditions. Often, the medical history of surgery or other conditions involving the lymph nodes will point to the cause and establish the diagnosis of lymphedema.
If the cause of swelling is not clear, other tests may be carried out to help determine the cause of limb swelling.
CT or MRI scans may be useful to help define lymph node architecture or to identify tumors or other abnormalities.

Lymphoscintigraphy is a test that involves injecting a tracer dye into lymph vessels and then observing the flow of fluid using imaging technologies. It can illustrate blockages in lymph flow.
Doppler ultrasound scans are sound wave tests used to evaluate blood flow, and can help identify a blood clot in the veins (deep venous thrombosis) that may be a cause of limb swelling. 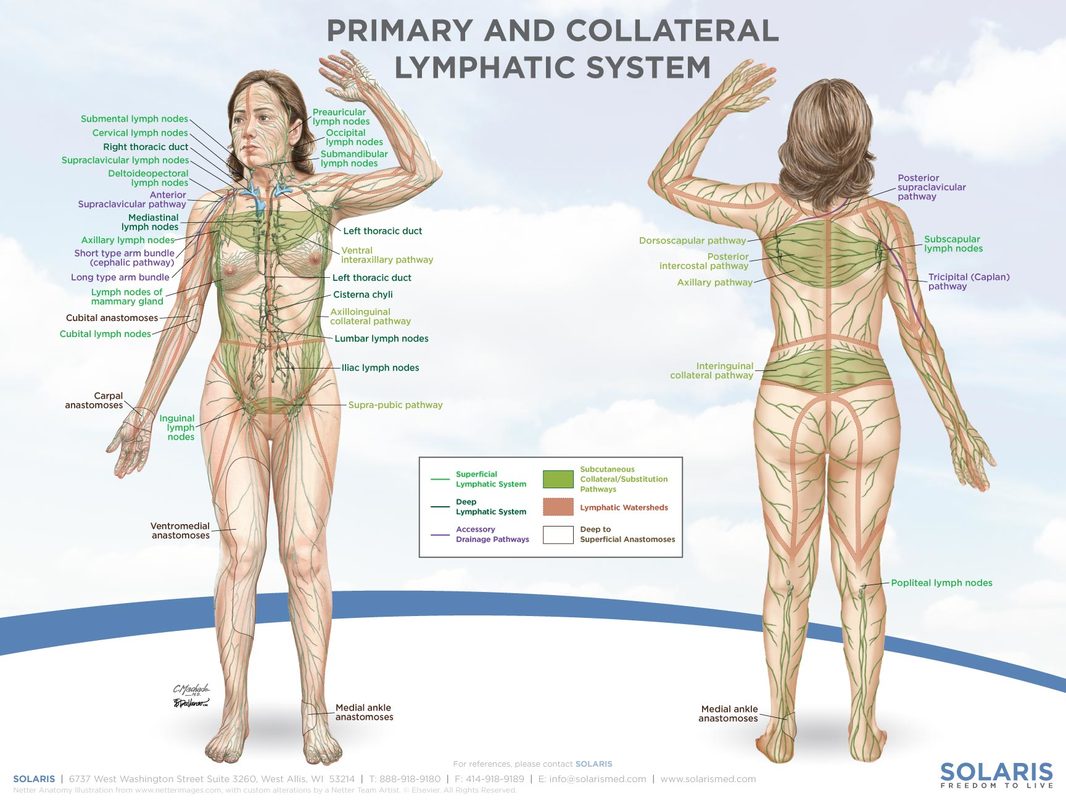 What are possible treatments for lymphedema? 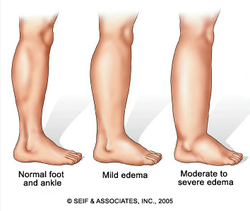 There is no cure for lymphedema. Treatments are designed to reduce the swelling and control discomfort and other symptoms.
Compression treatments can help reduce swelling and prevent scarring and other complications.
​
Examples of compression treatments are:
Elastic sleeves or stockings: These must fit properly and provide gradual compression from the end of the extremity toward the trunk.
Bandages: Bandages that are wrapped more tightly around the end of the extremity and wrapped more loosely toward the trunk, to encourage lymph flow out of the extremity toward the center of the body.
Pneumatic compression devices: These are sleeves or stockings connected to a pump that provides sequential compression from the end of the extremity toward the body. These may be used in the clinic or in the home and are useful in preventing long-term scarring, but they cannot be used in all individuals, such as those with congestive heart failure, deep venous thrombosis, or certain infections.
Manual compression:
Massage techniques, known as manual lymph drainage, can be useful for some people with lymphedema.
Exercises: Exercises that lightly contract and stimulate arm or leg muscles may be prescribed by the doctor or physical therapist to help stimulate lymph flow.
Surgical treatments for lymphedema are used to remove excess fluid and tissue in severe cases, but no surgical treatment is able to cure lymphedema.
Infections of skin and tissues associated with lymphedema must be promptly and effectively treated with appropriate antibiotics to avoid spread to the bloodstream (sepsis).
Patients affected by lymphedema must constantly monitor for infection of the affected area. In affected areas of the world, the drug diethylcarbamazine is used to treat filariasis.

What are complications of lymphedema? 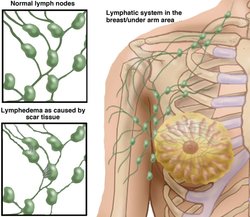 ​As noted before, secondary infections of the skin and underlying tissues can complicate lymphedema. Inflammation of the skin and connective tissues, known as cellulitis, and inflammation of the lymphatic vessels (lymphangitis) are common complications of lymphedema. Deep venous thrombosis (formation of blood clots in the deeper veins) is also a known complication of lymphedema. Impairment of functioning in the affected area and cosmetic i…ssues are further complications of lymphedema.
Those who have had chronic, long-term lymphedema for more than 10 years have a 10% chance of developing a cancer of the lymphatic vessels known as lymphangiosarcoma. The cancer begins as a reddish or purplish lump visible on the skin and spreads rapidly. This is an aggressive cancer that is treated by amputation of the affected limb. Even with treatment, the prognosis is poor, with less than 10% of patients surviving after 5 years.

Can lymphedema be prevented?

Primary lymphedema cannot be prevented, but measures can be taken to reduce the risk of developing lymphedema if one is at risk for secondary lymphedema, such as after cancer surgery or radiation treatment.
The following steps may help reduce the risk of developing lymphedema in those at risk for secondary lymphedema:
Keep the affected arm or leg elevated above the level of the heart, when possible.
Avoid tight or constricting garments or jewelry (also avoid the use of blood pressure cuffs on an affected arm).
Do not apply a heating pad to the affected area or use hot tubs, steam baths, etc.
Keep the body adequately hydrated.
Avoid heavy lifting and forceful activity with the affected limb; but normal, light activity is encouraged.
Do not carry a heavy purse on an affected arm.
Practice thorough and careful skin hygiene

​What is the prognosis for lymphedema?

Lymphedema cannot be cured, but compression treatments and preventive measures for those at risk for secondary lymphedema can help minimize swelling and associated symptoms. As mentioned above, chronic, long-term edema that persists for many years is associated with an increased risk of developing a rare cancer, lymphangiosarcoma.
Massage is a common treatment used to reduce swelling from lymphedema.

Our Physios are trained in specific lymphedema drainage techniques.