What Is The Backfire Effect?

What is the Backfire Effect?

The backfire effect is a very strong, psychological aspect in all of our minds. Whenever you are confronted with information and facts that contradict something you believe, instead of changing your view or forming a new opinion, your original beliefs will often be strengthened. You will believe in your previously formed opinion even more vigorously, despite seeing hard proof.
It’s helpful to picture all your beliefs and perceptions as the construction plans of a building. It is a building that you constructed through a great deal of effort. Any new contradicting information is a potential threat to your building, and that is a threat you cannot afford, because you’d have to build that section all over again. Instead, you build defenses around it. These defenses are made of weak reasoning supplied to you by confirmation bias. Each time there is a new threat, you have to make more elaborate defense structures. Not only do these defense structures keep out the threats, but also increase the value of your work each time. And with each time, your confirmation bias (which feeds on the value), gets stronger and the reasoning supplied by it is weaker. At the end of it, you would end up having a very weak structure with a huge personal value, due to all the effort it took you to construct.
All scientific discoveries have been counterattacked at some point. In fact, that’s the only way they’ve evolved.
How can we use the Backfire Effect for our benefit?
The backfire effect is very powerful and a part of the mechanism of our minds as humans. We can’t get rid of it, but we can make ourselves more aware of it. Being aware that you may be straining your logic only to preserve your beliefs will cause you to keep your mind more open, allowing you to definitely change and learn much faster.
Huge industries also use the backfire effect! Advertisements work by asserting what you already believe in, thereby strengthening your belief that they somehow tie to their product. The place you are from, the time of the day when you’re shown the advertisement, the culture of your country, the political system… all are considered to accurately assume your predisposed opinions.
The Internet revolution has provided the ability to argue with people across the globe, even if you’ve never met them. Heated arguments you might have witnessed (or participated in) on the Internet between two people going back and forth about a political opinion or a very emotional issue will usually end in very raised tempers and no conclusions. This is because each side is really just strengthening the other side’s original opinion.
We can change and learn much faster if we allow our ideas of the world to be flexible, and not be so certain that our beliefs are superior.
In the very wise words of Master Yoda… 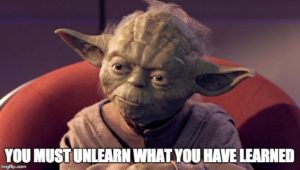